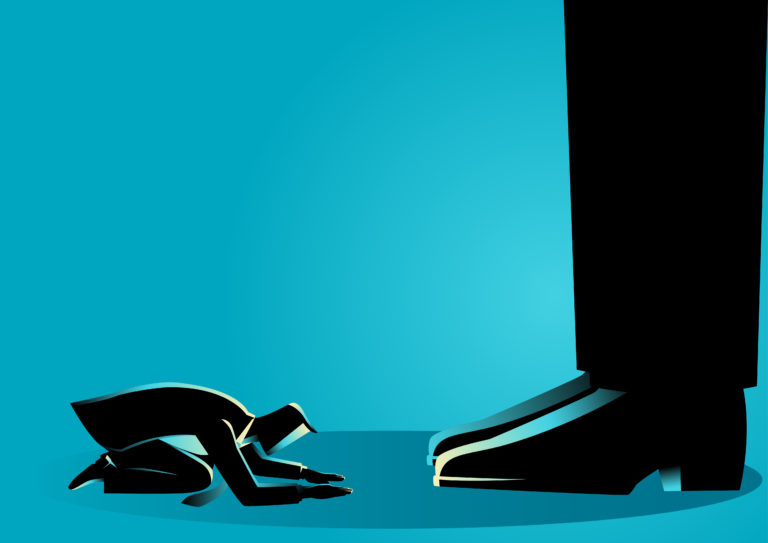 Business concept illustration of a businessman kneel down under giant feet. Concept for authority, dictator figure

Science is being used as a means of social control – that means control of you. Both science and religion have been used throughout history as mechanisms of social control. The elite classes put forth the idea that they know something the common classes do not know and therefore the common classes must heed the commands of the elites. The elites claim that they have heard God speak or they have discovered some new mysterious science and the common masses must for their own survival and protection follow the direction of the wise and learned elites.

Science when applied politically is just another faith
It is a faith controlled by central authorities who select portions of science to be applied socially, with terms such as climate change. Anything referred to as science, is supposed to be taken as true or real and not to be questioned. Of course, true science is the practice of unwavering skepticism and inquiry, constant challenge and re-evaluation. Science as a political tool is no longer science. It is just behavioral control, power over others. When science is used politically it is not research, inquiry, exploration, or progress as science is supposed to be.

In political application science is simply dogma and tyranny
Real science is always evolving, always open to question, and should never be used as a device for social control. The only thing that justifies control of humans is when those humans grant informed consent to be controlled, not as a voting mass, but one by one individually with power of revocation of that grant. Science is incidental to such political enterprise. You might say that real science is supposed to be the discovery of physical reality. In politics science is turned into something very different. Science is redefined to mean group truth, imposed reality, inflexible absolutist doctrine, something you must agree with, and behave accordingly or suffer reprisal at the hands of the state.

There will never be any such thing as group truth
A group is nothing but a bunch of individuals with individual viewpoints. Individually we believe whatever we want, whenever we want. If I cheer or boo along with the crowd that is a temporary and limited behavioral choice not the composite of my existence. Our unique individuality never goes away. Of course, we can play different roles. The important question is not what roles we play but who is choosing our roles for us? Do we have a right for instance to believe it is good luck to wear green shoelaces? Of course we do! We have that right even if science says we’re wrong. Or if the politician says there is no evidence that green shoelaces are good luck or if the media tells us that scientifically only red shoelaces are good luck. It’s not a question of science, it’s a question of who tells you what shoelaces to wear and whether they use force when they tell you.

It’s extremely difficult to exploit, enslave, tax, and control people who are determined to control their own lives
who put a value on self-determination. Everyone has at least some desire to control their own lives. The high art of elitism is to convert that desire into conformity with the collective elites. Those people who run the human farm are always looking for mechanisms of control. They know that when we are told that something is based on science we tend to accept it. It is therefore a simple matter to select or concoct science that suits their agendas and tell us we have no choice but to worship that science and to serve the prescribed outcome. Those who bow to the science god will be rewarded. Those who resist will be ridiculed and shamed. If we are going to shame people for not believing in science, we must shame everyone who holds a religious faith. We must shame every investor who takes a risk on his own hunches. We must shame a young woman who believes she can go where no woman has gone. We will be told that our brilliant leaders with their exclusive mastery of science will lead us to our proper destiny.

Over and over human faith in nature has proven that promise to be a lie
For centuries religion was deployed as a mechanism of social control. People were burned at the stake when they fell out of favor with their psychopathic, religious dictators. Religion was used to create social order before governments even existed. But people now know too much to be told by priests what God wants them to do. Americans now feel free to select and practice religion or secularism their own way as a civic right. The elite, those who hold and control centralized power, need an exclusive ideology, which they can impose upon others and which others will feel they have no choice but to accept.

By claiming scientific superiority elites have seized their high ground for social control
Of course, those elites have no interest in truth and they will only give the word science a bad name over time. But science is now being positioned as the natural means of social control. If some scientific principle undermines the elites political agendas that scientific principle will not be reported and you will have no idea it exists unless you go out and look for it. If science could not be corrupted, Monsanto would not exist. Nuclear weapons would never have been used against civilian populations. Pharmaceutical products would be affordable and cause no side effects. Most wars would not have occurred. Cancer would be cured consistently with little cost and little fanfare. Economics and finance would be known and controlled by every individual not by central elites. Everyone uses science and technology to better their lives if and when we gain access to it. But of course, much of science and technology is hoarded and controlled by people who may not have social ethics as their primary objective.

The military is desperate for scientific advantage
Corporate executives are desperate for scientific advantage. Many others including social engineers are desperate for scientific advantage. So science is hoarded, suppressed, and controlled whenever possible by whoever can do it. The science and technology that you and I understand and use is certainly a small fraction of the science and technology held and used by the elites and their servile agencies and institutions. Most of us are in that sense very ignorant. How can we know something that is hidden from us? Our ignorance is a tremendous advantage for anyone who wishes to control us. If we are not ignorant, they will speak to us in ways that make us feel ignorant because as long as we are subservient it doesn’t really matter if we’re ignorant or not. In politics it’s not the science, or the intelligence, or the religion that really matters.

Yes, we can all benefit from knowledge
but when knowledge is kept from us and used to control us, we are slaves. Claims of superior knowledge that are used to control others – it’s not science – it is just political manipulation and mass marketing. True science in the hands of everyone is powerful and useful. Science that is exclusively in the hands of elites, central authorities, and power brokers is just intellectual oppression and political gamesmanship. The people who want to use science to control us are called technocrats. Just as a priest in 200 BC would tell the peasants that he has spoken to God and God said it to him that peasants should give their money to priests. Technocrats will tell us they know science and science says we must obey and serve the technocrats.

The technocrats know best
and we’re not capable of running our own lives, because we don’t have all the science they do. They tell us that by paying taxes, we will make the climate stop changing. And we will believe them, because they have science and we don’t. Or we think we must believe the science as they present it. It’s control by allowing technocrats to dictate our behavior, we will save the planet or cure cancer or conquer space or spread democracy. We will be promised wonderful things if we obey the technocrats. We dare not question we dare not control our own lives. We must do as technocrats command and we must never imagine that any technocrat would be selfish, greedy, or corrupt.

There are a few of us who know that our rights and freedoms must never be conditional
on our intelligence, our education, or our choices of culture and lifestyle. Some of us know that we must maintain our own dignity and believe in our own self-worth no matter what our circumstances. And we must not let ourselves be intimidated by sanctimonious academics and presumptive overlords. We may call ourselves libertarians, anarchists, sovereigns, or simply Americans. Sure, knowledge is a wonderful thing and hopefully we can all climb the ladder of knowledge. Hopefully, we can all conquer any suffering that is caused by ignorance. But knowledge is not a measure of human worth, dignity, freedom or the exercise of personal independence. No matter how superior a man is in knowledge, he has never superior in humanity or rights. And he is never entitled by his IQ, his education, his ambitions, his wealth, or his bloodline to take control over other people’s lives. But people who are wealthy and privileged forget this. They find some of us are easily and willingly controlled. Then they want more and more. And now we find that we cannot rest and expect to exercise our rights our freedoms and to protect our property. At this late stage we must not just act to recapture defend and protect those rights for ourselves – we must fight.