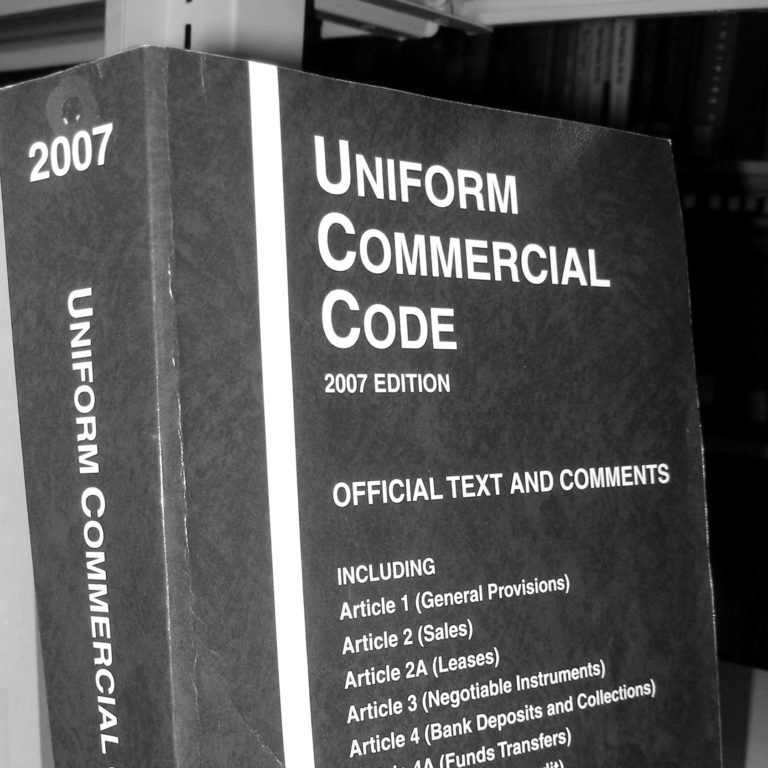 The Uniform Commercial Code (UCC) is the result of an effort to harmonize the law of sales and other commercial transactions in all 50 states within the United States of America. The Code is not itself law, but a recommendation of a set of laws that should be adopted by the states.

In 1942, a group of legal scholars began work on one of the longest and most comprehensive sets of uniform laws in the United States: the Uniform Commercial Code (UCC). Nine years later, in the fall of 1951, a first draft was finished by an editorial board of representatives from the National Conference of Commissioners on Uniform State Laws and the American Law Institute. The UCC framework evolved from earlier uniform commercial acts involving transactions, such as negotiable instruments and sales receipts, adopted by many state legislatures starting in 1896.

Some legal scholars today consider the UCC one of the most important developments in American law.

Article 1 (General Provisions)
provides general definitions and principles of interpretation for all of the articles.

Article 2 (Sales)
covers every stage of a transaction for the sale of goods, from general obligations, construction of a contract, and performance under that contract to breach, repudiation, and excuse of a sales contract. Article 2 further offers remedies for disputes that may occur during a sales transaction.

Article 4 (Bank Deposits and Collections)
regulates collect items and post deposits, as well as the relationship among depository, collecting, and payer banks, and between a payer bank and its customer.

Article 5 (Letters of Credit)
addresses letters of credit, including the issuer’s obligations, warranties that arise, and remedies that are provided for problems during the issuance process or after a letter of credit has issued. ‘Letters of Credit’ are typically issued by a bank or other financial institutions to business customers in order to facilitate trade.

In 1989, Article 6 (Bulk Sales)
was revised and changed from covering bulk transfers to governing bulk sales. It regulates the obligations of a buyer of a bulk sale. A bulk sale generally involves the sale of more than half of the seller’s inventory, not in the ordinary course of a seller’s business, when the buyer has (or after inquiry would have had) notice that the seller is not going to continue to operate a similar business after the sale, including auction and liquidation sales. There are specific provisions for notice to claimants (such as creditors of the seller), distribution of the sale’s proceeds, filing notices of bulk sales, and liability for noncompliance. This ensures that creditors are not bypassed when a company decides to end its business. Many states have determined this topic to be obsolete and the Uniform Law Commission has recommended repeal.

Article 7 (Documents of Title)
governs warehouse receipts, bills of lading, and other such documents describing ownership and transportation of goods.